On November 14th Dr. Matouš Jíra has attended an interview regarding Vietnamese police in The Czech republic. He is very sceptical towards this topic. Among other things it could cause problem in effectivity of police work, this could lead in to information leaking and abusement. This could also lead in to untapped potential of 2nd generation.

„Unfortunately I dont think that this colaboration would lead to any benefits. I think that this step is rather unfortunate which has very little hope to manage the expectation. If the police department of The Czech republic has problems with getting credible information from the criminal enviroment than I believe one of the best options would be to employ citizen from the Vietnamese minority. It´s really important to realize that the Vietnamese minority, especially the second generation, is very loyal to The Czech republic. They percieve The Czech republic as their home and they despite the Vietnamese that get in to troubles with the criminal activity. The potential is very big in this matter but unfortunately it´s unutilized. I also believe that the police of The Czech republic should learn to better collaboration. It´s important to build some trust because if police wants to get reliable information, then the comunity has to trust the police organization too.“

The organization of security with the collaboration of the European union has bought the licence of the documentary called „The Tree Workers“ by Daniela Agostini so that it can use for all its organization and missions. The organization of security has the intention to use this documentary for educational purposes especially for judges, prosecutors and investigators training. Also, this is going to be used to show to people what can happened during human trafficking investigation. This document has been shown for the 1st time at the International judge seminar that took place between October 27th-30th 2014.

Prague Attorney legal team has a newcommer from January 2014. It's a new articled clerk Mgr. Michaela Jartymová. You can find more information about her here.

On the website of the Legal Advisor you can now read the interview of Dr. Matouš Jíra and Dr. Nguyen Viet Anh to learn more about their business and the relationship of Vietnamese to the Czech law or Vietnamese crime. More at the link.

In February 2014, Prague Attorneys welcomed a new articled clerk, Mgr. Vít Tokarský. To find out more about the new member of our team, visit the section Legal Team.

Mgr. Naďa Smetanová, a lawyer from our law office, provides legal services in cooperation with the civic association Klub Hanoi at the headquarters of the association in the area of Sapa at Libušská 319/126, Praha 4 - Písnice every Tuesday from 5 p.m. to 8 p.m.

Problems in the investigation of the Tree Workers case were discussed at the international workshop "The Challenges of Human Trafficking and the European Response: The View from Vienna, Brussels and Strasbourg", which was held in Brno. One of the guest speakers at the workshop was Professor Ryszard Piotrowicz of the organization GRETA.

Dr Matouš Jíra and Dr Štěpanka Miková participated in the expert working group on "Legal Redress and Compensation" at the conference on "Protecting and Promoting the Rights of Victims of Trafficking" in Warsaw. Parosha Chandran (human rights lawyer), Klára Skřivánková (program coordinator of the organization Anti-Slavery International) and Marieke van Doornick (Counsellor for Public Affairs of the organization La Strada International) also attended the conference.

On 11th October 2013, Dr Matouš Jíra attended the workshop "The Uncertain Status of Victims of Trafficking in Human Beings", organized by the Law Faculty of Masaryk University in Brno. Dr Jíra spoke about the role of victims in criminal proceedings in the context of the Tree Workers case and the problems faced by the victims in the proceedings.

From 16th October 2013, the services offered by the A2O office in the business centre SAPA include notarial services. Deputy Registrar will be available every Wednesday from 1 p.m. to 5 p.m.

The legal team of Prague Attorneys has grown by one member, Mgr. Kristína Tisová, on 2nd September 2013. To learn more about our new articled law clerk see the Legal Team section.

Dr Štěpanka Miková and Dr Matouš Jíra decided to submit an application to the European Court of Human Rights in Strasbourg due to the inaction of the Police of the Czech Republic in the Tree Workers case.

On 23rd April 2013, Dr Štěpánka Miková and Dr Matouš Jíra attended a press conference at the international conference on Detection of Trafficking in Human Beings for Labour Exploitation in the American Centre. The aim of the press conference was to inform the public about the main issues concerning this project.

On the 22nd April 2013, Dr Štěpánka Miková and Dr Matouš Jíra attended an international conference organized by Mr. Lukáš Manhart, member of the City Council of the Capital City of Prague, dedicated to the problematic of Detection of Trafficking in Human Beings for Labour Exploitation. Members of our legal team conducted a workshop on Practical Issues of Strategic Litigation at the conference.

On the 21st March 2013, the screening of films the Tree Workers Case by Daniela Agostini and the Health Dealers by the couple Nghiem Quynh Trang and Do Duy Hoang took place as part of the European Week Against Racism in the multicultural centre SAVEC.

The first film tells the story of hundreds of foreign workers who were exploited in the Czech forests. The second film gives an account of the problematic of commercial insurance for foreigners. Through witness accounts of migrant workers and interviews with qualified experts, the filmmakers of the second film bring to our attention the lack of logic behind the system of commercial insurance for migrant workers which discriminates foreigners in access to healthcare and creates unsolvable financial problems for young families with children.

Our law office cooperates on a long term basis with the filmmakers of both films and we would hereby like to express our support for the films. 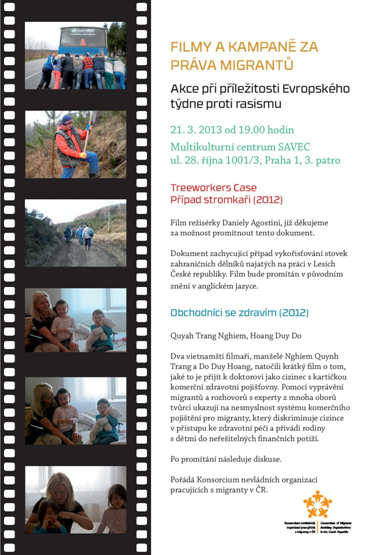 To celebrate the Chinese New Year our law office has organised an event called “Welcoming of Spring” at its branch A2O. The participants of this informal meeting had a chance to meet all the members of our office and to learn more about the services provided by A2O.

On the 1st December 2012, our law office opened with its partners a new branch called A2O in the shopping centre SAPA. Our new branch A2O provides in cooperation with external partners a complete set of services designed for starting or existing businesses.

The Special Representative of the Organization for Security and Cooperation in Europe (OSCE) and Coordinator for Combating Trafficking in Human Beings accepted the invitation of the Czech Republic and visited Prague on the 13th November 2012. Dr Matouš Jíra attended a meeting organized by the Ministry of Foreign Affairs for the occasion which was dedicated to the problematic of human trafficking and especially to the Tree Workers Case.

Throughout November, we are interviewing applicants for a professional traineeship. You can find out more about the traineeship here.

Saw the opening of the 6th PILnet European Pro Bono Forum in Madrid.

Dr Štěpánka Miková and Dr Matouš Jíra of Prague Attorneys were on hand in Madrid to discuss Pro Bono and Human Rights issues as well as the Tree Workers Case which involves the exploitation of foreign workers labouring in the Czech forests.

Dr Štěpánka Miková and Dr Matouš Jíra of Prague Attorneys joined Irena Konečná, director of La Strada (European Network Against Trafficking in Human Beings), in welcoming Mrs Rani Hong to Prague. Mrs Rani Hong is a human rights lawyer, a Special Adviser to the organization UN.GIFT (Global Initiative to Fight Human Trafficking) and President of the Tronie Foundation. Dr Miková and Dr Jíra showed Mrs Rani Hong around Prague and they discussed the problems concerning the Tree Workers Case and other issues of trafficking in human beings over dinner.

From the 11th to the 12th October 2012, Dr Štěpánka Miková and Dr Matouš Jíra attended a conference organized by the Organization for Security and Cooperation in Europe: Special Focus Event to the 12th Alliance against Trafficking in Persons.

On the first day of the event, Dr Štěpánka Miková and Dr Matouš Jíra took part in the panel discussion "Access to Justice, making compensation a reality for trafficked persons" in which they talked about their experience in representing foreign nationals who are victims of labour exploitation in the Czech forests and they discussed the problems concerned with the audience.

THE TREE WORKERS CASE - TRAILER by Daniela Agostini on Vimeo.

This Daniela Agostini documentary tells the story of the many foreign workers who are victims in what is probably the largest case of human trafficking in the European Union for the past 20 years.

The premiere screened on the 21st of September 2012, was followed by a discussion at the American Centre and was attended by Dr Štěpánka Miková and Dr Matouš Jíra of Prague Attorneys.